About Us
Irish Dancing in Dublin 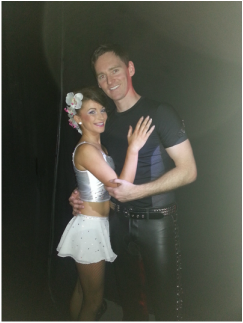 Aisling and David met in Las Vegas 10 years ago and married in Cork in 2011. They have had amazing experiences dancing all over the world. They have danced lead together for over 20 million people in over 100 countries. Some that were very special are; Buckingham Palace in London for Prince Charles and Camilla, Duchess of Cornwall, The Kremlin Palace in Moscow and Bernabéu Stadium in Madrid. They have also performed on numerous TV stations and documentaries. 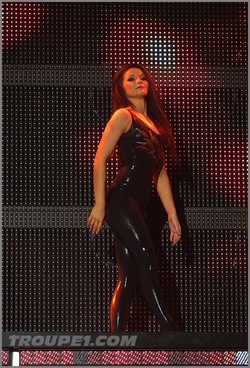 Aisling McCabe started dancing at the age of 3 in her hometown of Cork. She competed all over the world and placed highly in World and National competitions. She has 12 years of professional dance experience having danced with the biggest selling musical of all time - Michael Flatley’s Lord of the Dance. She performed as principal dancer with the company for 6 years, playing the principal role alongside Michael Flatley numerous times, this being one of the most prestigious roles in the entertainment industry.

She has performed for audiences of over 20,000 people. Some of the most impressive performances being for Prince Charles and Camilla Parker Bowles in Buckingham Palace alongside Michael Flatley, and a residency in The Venetian Resort in Las vegas. She also performed to sold out shows in the 3 Arena in Dublin and the Wembley Arena in London. Aisling also took part in Michael Flatley’s production Feet of Flames, in 2009, in which she played the principal role for a recording released on DVD called Michael Flatley Raw!

She was promoted to dance captain in 2009, and managed a troupe of over 40 performers for 4 years. Working alongside dance master Marie Duffy Pask and Michael Flatley. This was a huge responsibility, making sure the show was to the highest standard on a daily basis before being viewed by thousands of people.

In 2013 she passed her TCRG exams with Coimisiun le Rince Gaelacha, the governing body for Irish Dance, and went on to set up the highly successful Cabe Academy of Irish Dance in Dublin. She is owner and teacher at the academy.

She has performed with Damhsa in between traveling the world since 2011, and is delighted to now have a managing role in Ireland’s premier Irish Dance Entertainment Company, Damhsa. 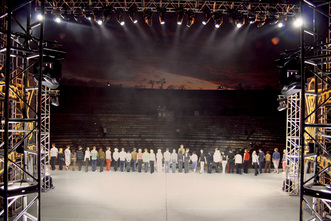 Rehearsing in an amazing outdoor arena in Taiwan
Irish Dancing has brought them to many fantastic places such as the Pyramids in Egypt, The Great Wall of China, the Acropolis in Athens, Table Top Mountain in South Africa, Grand Canyon in Arizona USA, Eiffel Tower in Paris France, Auschwitz in Poland and The Berlin Wall in Germany. Irish Dancing enabled Aisling and David to travel the world and see places they may never have seen.